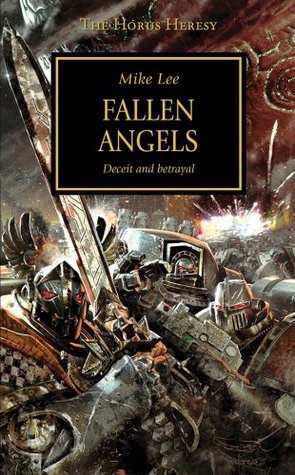 It seems to have taken me forever to read this book. Being busy at work has certainly not helped matters but I have finally managed to finish it! Not that the summer holidays have had anything to do with that, no sir!

I’ll start by saying that I wasn’t a huge fan of the first Dark Angels book – Descent of Angels by Mitchel Scanlon. I found the pacing a bit off and compared to the rest of the series, it was a bit of a bad egg. It wasn’t awful, it just wasn’t as good as some of its predecessors.

Fortunately, this one is better. The pacing at the start of the novel is slow, I will concede that point and it took a while to get going. When it did get going however, it turned into the ‘cannot put down’ page turner that I expect from a Horus Heresy novel.

The story picks up the two separate tales of cousins Nemiel and Zahariel; the two protagonists from the first novel and continues their saga. I’m not going to say overly much about what happens, I want you to go and read the novel for yourself and find out but I will say that it is exciting.

The plot of the two stories don’t really entwine with one another. Nemiel’s is based on the planet of Diamat, where the Dark Angel’s, along with their Primarch have to thwart the rebel’s attempts at securing the planet. Zahariel’s is set on Caliban along with Luther and the other ‘banished’ Dark Angels. The two plots are both engaging, when they find their momentum, and there are some astonishingly well written battle scenes to boot. There are some pretty hefty twists towards the end of the book too which were interesting, again, I’m not going to discuss them in detail but believe me, you’ll roll your eyes!

Give the book a read, it is well worth it despite the slow start!