The trek to Warhammer World is never a hard one, or that far. It’s a couple of hours away at most. We bought our tickets for the Open Day at the Vigilus day and off we went yesterday for another day of exciting reveals and fun. I met up with some lovely people from the Internet and actually played a game!

I am unsure where to start, so let’s begin with that game. Myself and Dave teamed up to play against Chris’ Necrons. I have never played against Necrons before; not hard, I’ve not played all that much. It was a fun game however.

Ahriman, his friend and some demons squared up against some necrons. It started off well, destroyers got destroyed and the battle progressed. However, Death Hex, a much needed spell, was failed by Ahriman and the tides of battle turned. 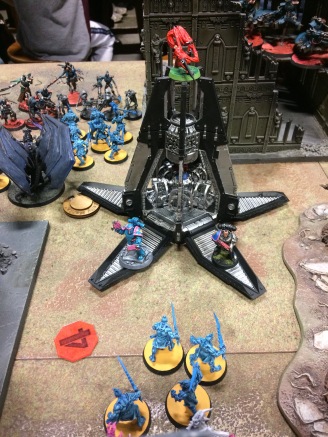 Before everything had a chance to go horribly wrong however, the Legion of Dave and Fondlechew dropped in. They soon realised they were in the wrong place (era) and hastily departed.

To cut the tale short, Ahriman decided to try and be a hero and went after the warlord. His glory was cut short when the warp said ‘No’ – Perils of the Warp is a huge hinderance to his escapades, though he did float up to the tall part of the board and look mildly cool. The best part of the game was when the Changeling warp bolted one of the Necron Lords and turned it into a Chaos Spawn. Hilarity ensued when the Chaos Spawn started attacking the remaining necrons… It wasn’t enough though. We lost the game in the end. It was a lot of fun though and that is what counts.

The other fun news was the released and the amazing atmosphere that was going on. There is always a buzz at these events and from the moment I met up with friends, new and old to the moment we left, it was fun. I painted Larry, a chaos warrior, in half an hour and he looked decent; pictures to follow.

I also got to meet Josh Reynolds and David Guymer, who signed a book for a good friend of mine in Canada. Both of them were very nice fellows and approachable, reminding me that the authors of the books I love are also people. I have nothing to fear from them and running away is just silly. 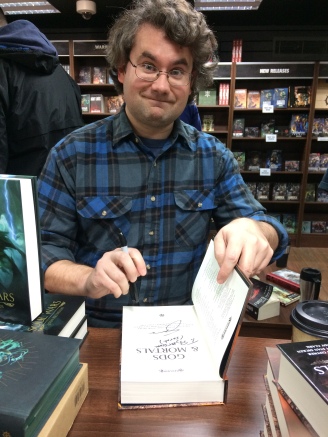 Last thing I am going to leave you with is this image of one of the released. The Dark Apostle is exceptionally exciting because Black Legion but… and I am sure you will have seen this on the internet already, this is the really exciting thing. I have circled it just to make sure you all see why I am so excited.

I do hope the Boss is going to turn up…