Before I stopped ebing a teacher, I did a give away on Twitter, something I like to do from time to time as it’s fun and a good way to meet new people. The winner of this give away was a fellow named John. Instead of having a miniature in mind, I asked what it was he wanted me to paint – within reason of course, and I would paint it to his colour scheme and specification. He chose a Warpsmith and sent me a picture of his scheme. Excellent. I will share the pictures first, then discuss! 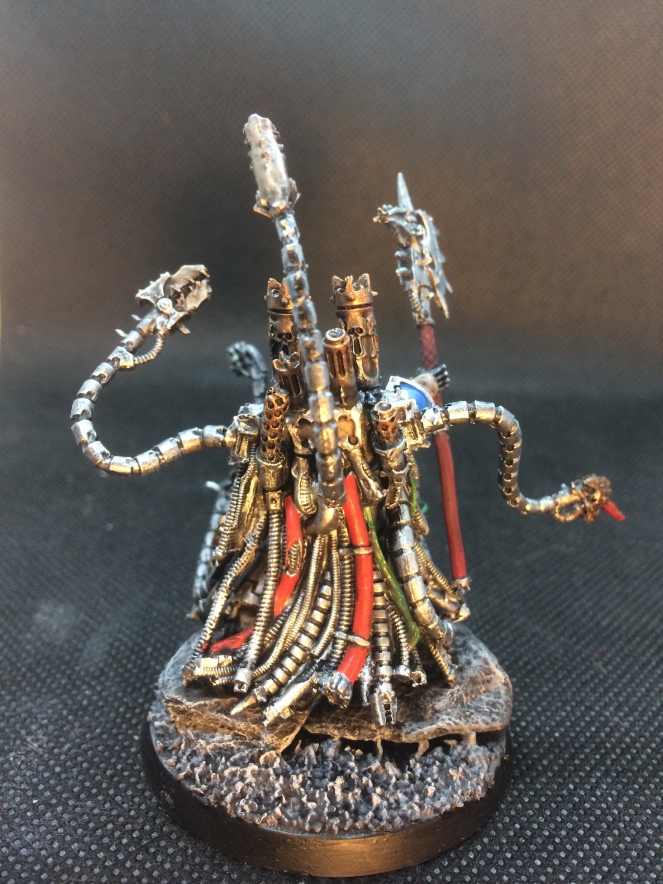 I ordered the Warpsmith, and was much dismayed to learn that they only came in finecast. Not only did they only come in fine cast, but the levels of excess flash on them nearly had me in tears. As you will see from the pictures, there are a lot of dendrites and extras flowing off the Warpsmith. Each one of these had to be cleaned up and reshaped using the hot water, cold water method. I had to straighten out the weapon as well, as it was pretty bent too.

One thing I did try was a bit of heat searing on the pipes at the back. Not sure if I completely succeeded but it was a first attempt. I need to add other colours, so will try that on some random things another time.

The levels of flashing on the miniature were awful. I should have taken a picture to highlight how bad it was with this particular individual. Finecast should be so much better than it is. Even the feel of the material is off. I am now working on Mephiston, another Finecast miniature and he almost feels spongy. Thankfully, there are no airbubbles on him. The one on the Warpsmith was easy to carve out and then hide, but I know there are plenty of people out there that have had to return miniatures because of poor casting. This is the only thing I dislike about what Games Workshop do. Finecast is a cheap, poor quality alternative and it should just not exist or be used anymore. It puts me off painting fun miniatures because they are such poor quality.