I have finally finished Primaris Dante! He took me ages to complete but I am so proud of how he turned out. Here are the finished pictures:

This is not my first intercessor squad. I have long since stopped counting how many I have painted. This is the first squad in 3rd Company for the Blood Angels I have been collecting.

I started painting them before the Pandemic.

I have finally finished them. I’m super pleased with how they turned out. I feel the edge highlighting is crisp and the colours decent. I used a background to take some pictures and then took some others without it.

They have now joined their brothers on the shelf and hopefully, I’ll be able to finish some more pre-pandemic minis soon!

This is artificer Norric. I painted him for someone who got in touch about the print and paint service we offer at the Foundry. He is painted to Tier 2 quality and was loads of fun to work on. Fortunately. The client sent over loads of pictures of how they wanted him painting, which always helps. Using these I was able to create the mini he was after, as seen below!

Norric was created using HeroForge and printed out using Forster’s Foundry. The link to the service is below:

I’ve found some time, between the commissions and the Foundry, to practice some more layer blending.

It’s a technique I am far from mastering but feel this mini has forced me to consider how I layer blend and as such, I have gotten better at it.

I wanted to try blending different colours, not just light to dark tones. I feel the result is a very vibrant mini and that I have had a good bit of success with the technique. It’s nowhere near perfect, but it is a good step in the right direction.

Points for knowing who he is summoning!!

I love painting skin. It’s one of those things I find very enjoyable that I know a lot of others don’t like doing. I wanted to try other skin tones, so bought myself a set of Scale75 paints focusing on skin tones.

I have used them to experiment on a Warcry Warband – The Spire Tyrants. They show a lot of flesh and it seemed a good idea. Most of the tones focused on dark skin. Here they are:

I loved how the colours blended together and how the warband has come out. The black and gold looks great against dark skin. Good experiment all round.

I have finished the second part of the Adeptus Mechanicus after what feels like an age. I have very much enjoyed the commission, and working on a whole army all at once rather than a few miniatures here and there. It was not as much of a slog as I feared it might be, but I did use a lot of red!

The only mini I have not pictured is the flier, as It is being sent part assembled, and it did not fit in the light box!

I shall be taking a bit of a break from the Ad Mech, but not for long as I already have a few more waiting to be done!

I started an Age if Sigmar army a while ago and went for Deepkin. I’ve not done anything ‘elfy’ before so wanted to do something different. I also really liked the Deepkin miniatures so that helped.

I did not want to copy the paint scheme from the book so thought about other biomes with water. Swamps came to mind and so I thought I would take that as a theme. I opted for greens and browns as the base colours, and then green tinged silver for metallics. These are the first finished squad, they are not my best work by far but they are a good first try in my mind. 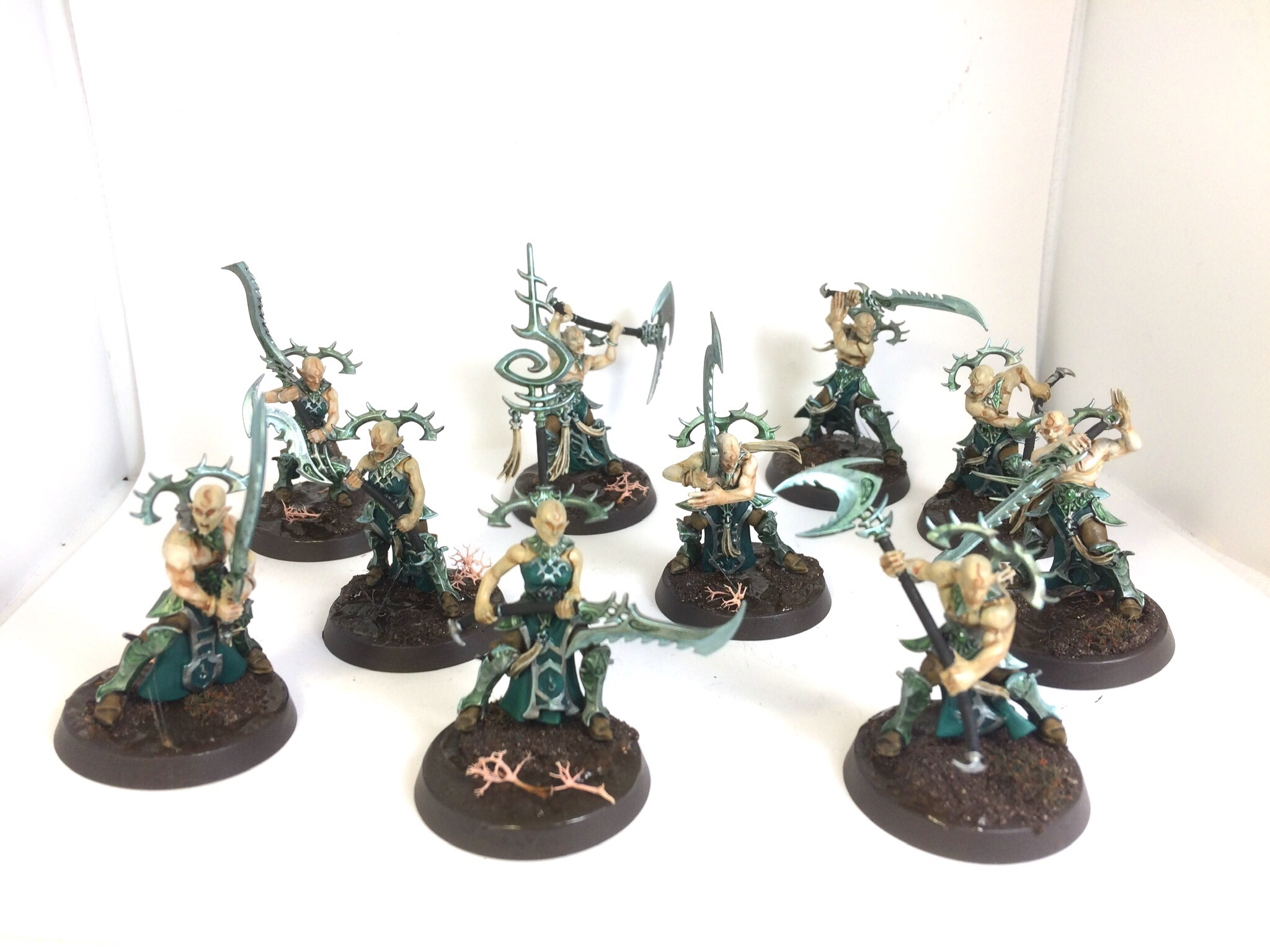 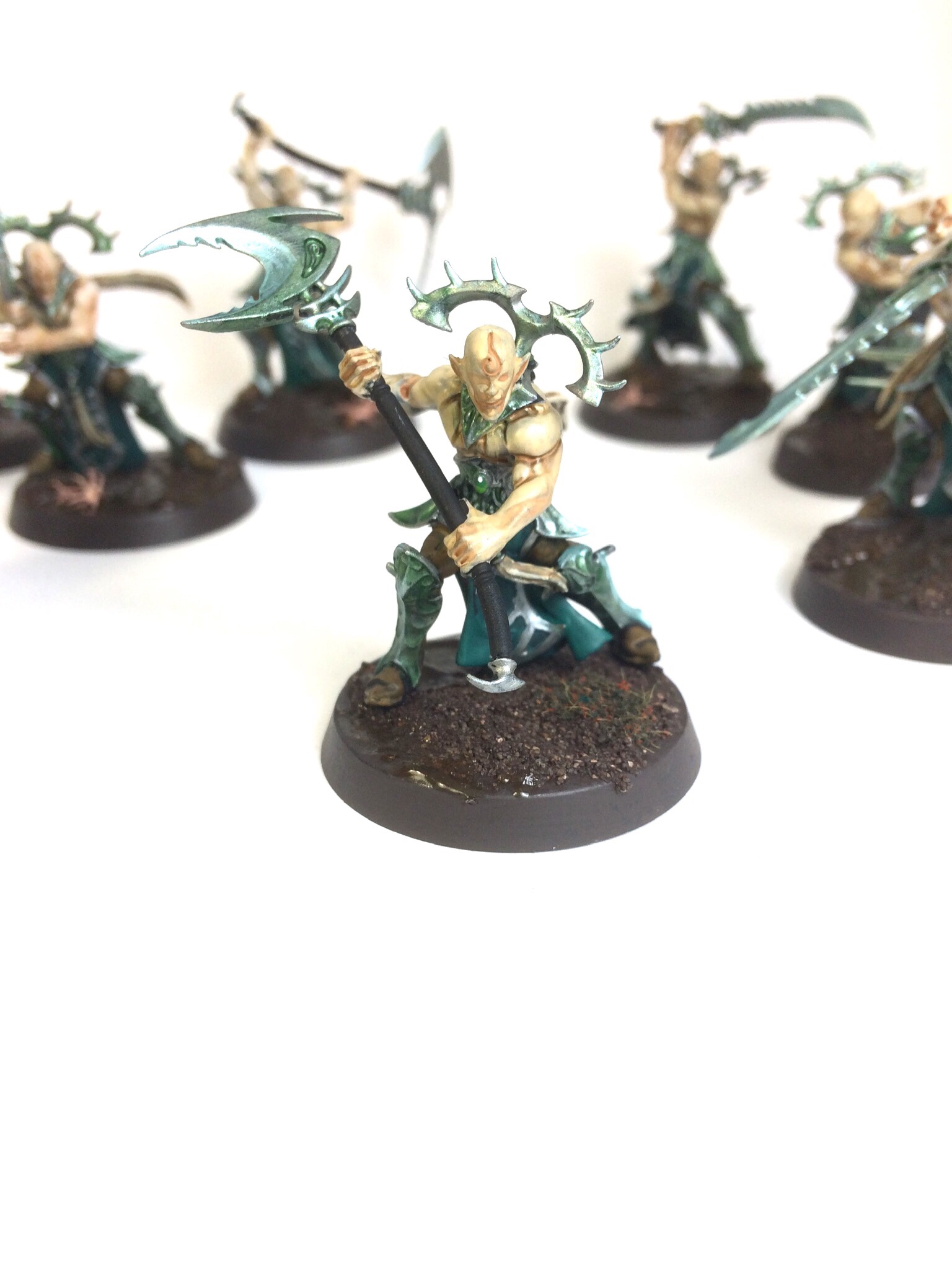 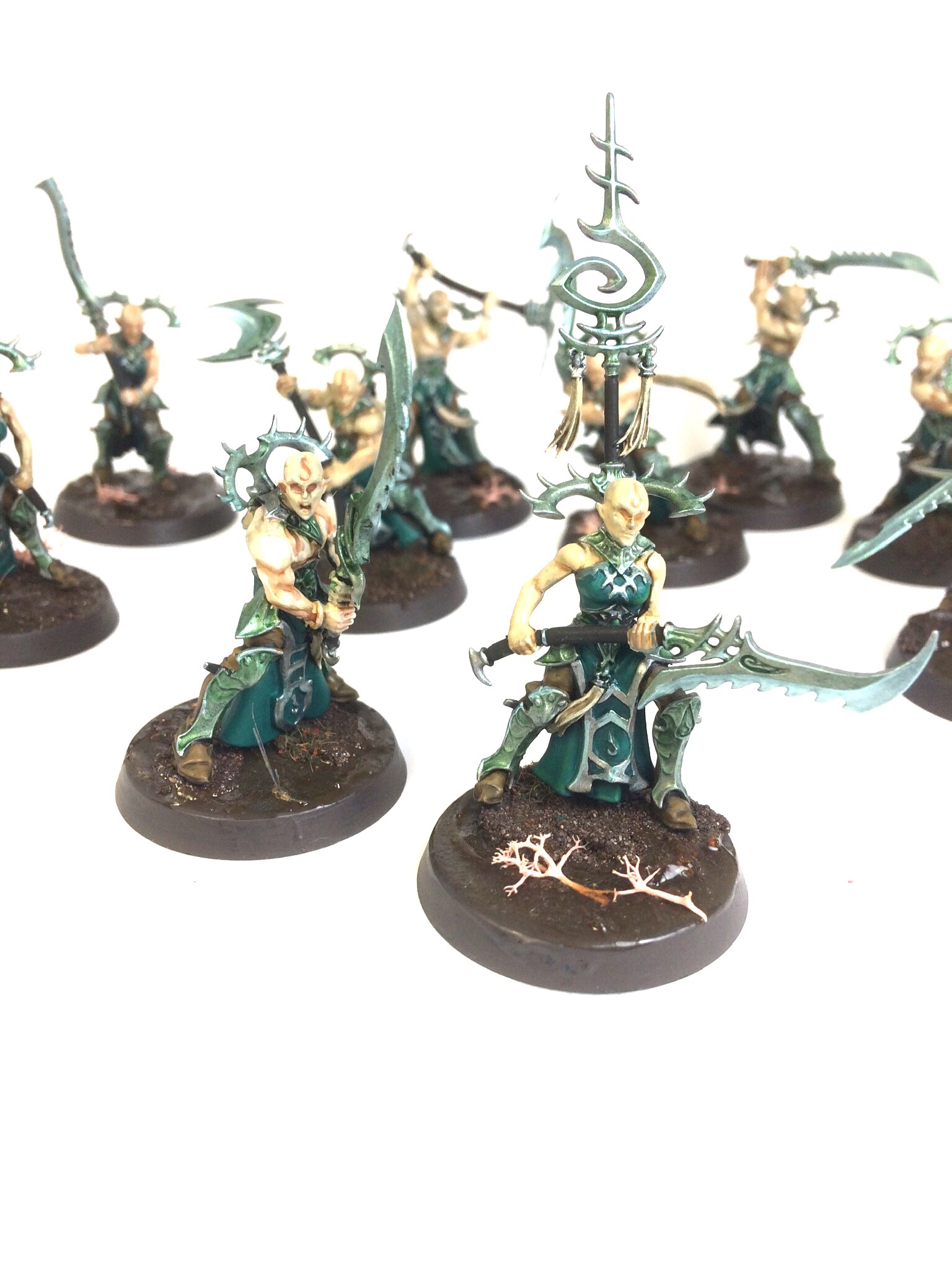 The bases were the hardest part, I used mud texture paint and then mixed some sepia wash with some water resin to get the muddy water. I used some old bristles for reeds, some coral bits for plants and some dark brown flock as well. I might try adding some green onto the next set as they are a bit dark still.

I also need to finish the character, but that will come tomorrow, as well as airplanes!

Today I got to tinker around with my idea for golden demon. I want to create a diorama – because they are cool – between Mephiston and Doombreed, as I have mentioned before.

I now have all the parts I need except the base itself and I needed to know what size it had to be before anything else. I gathered some scenery, some proxies and began tinkering around with them: 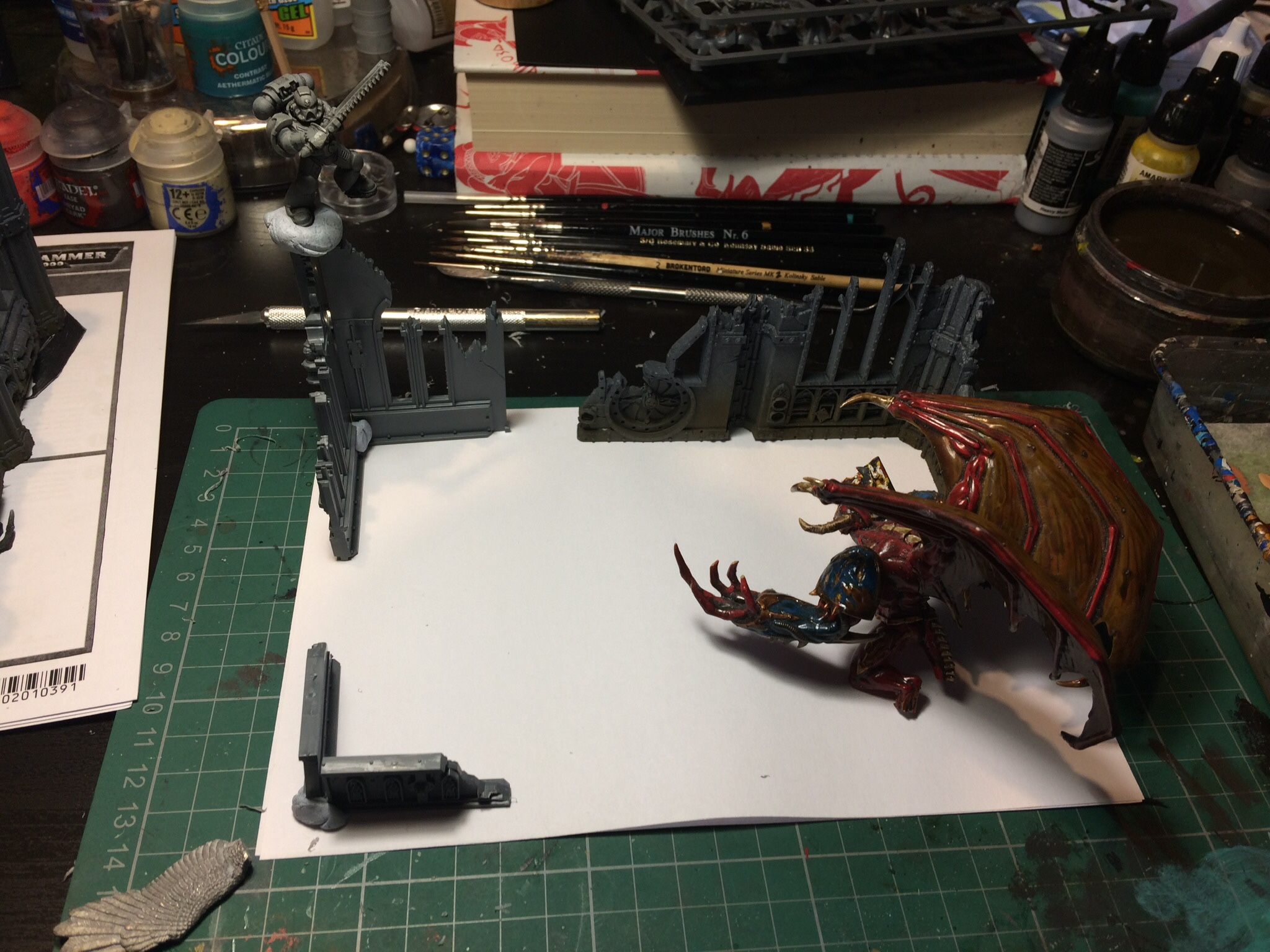 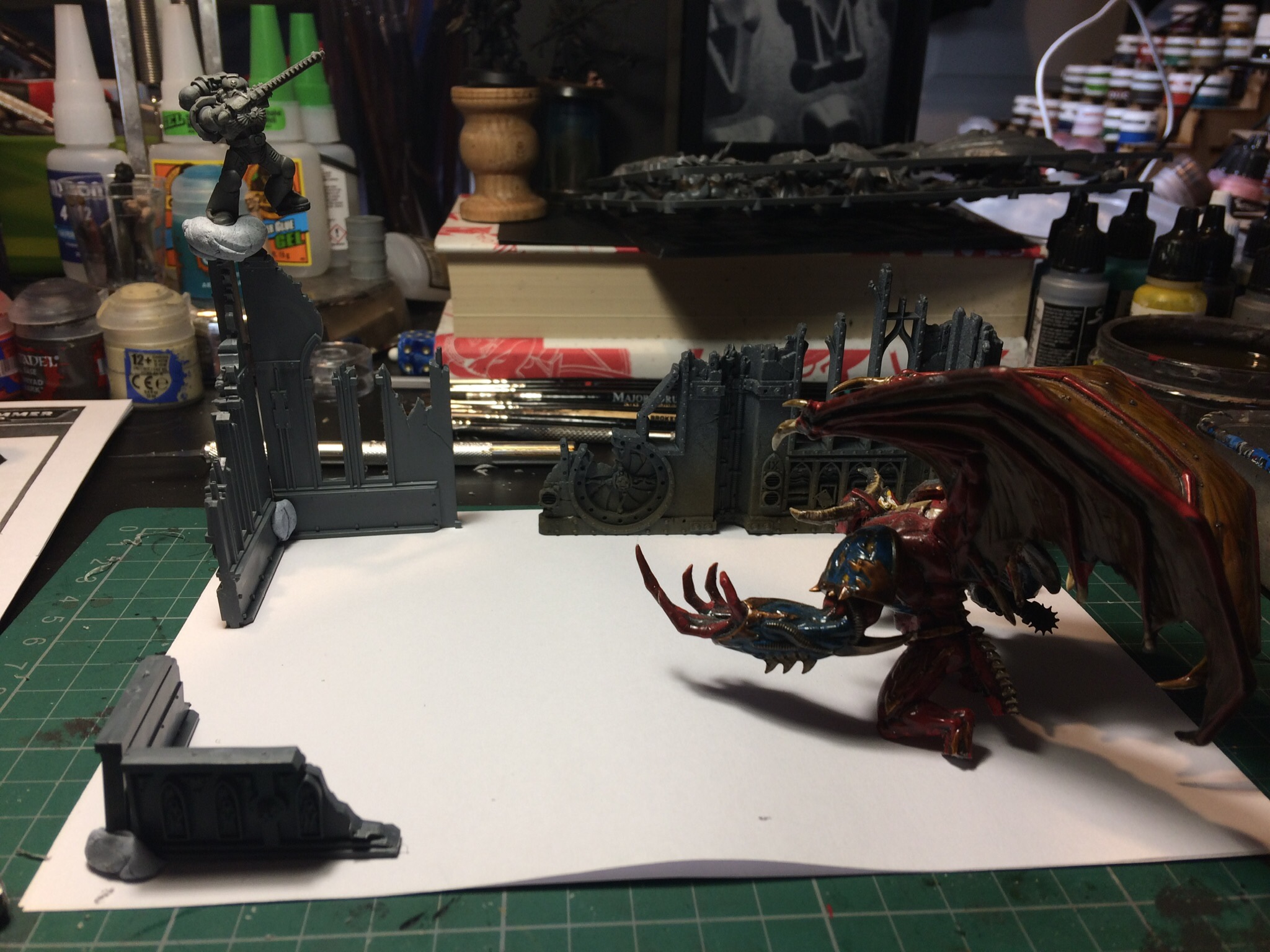 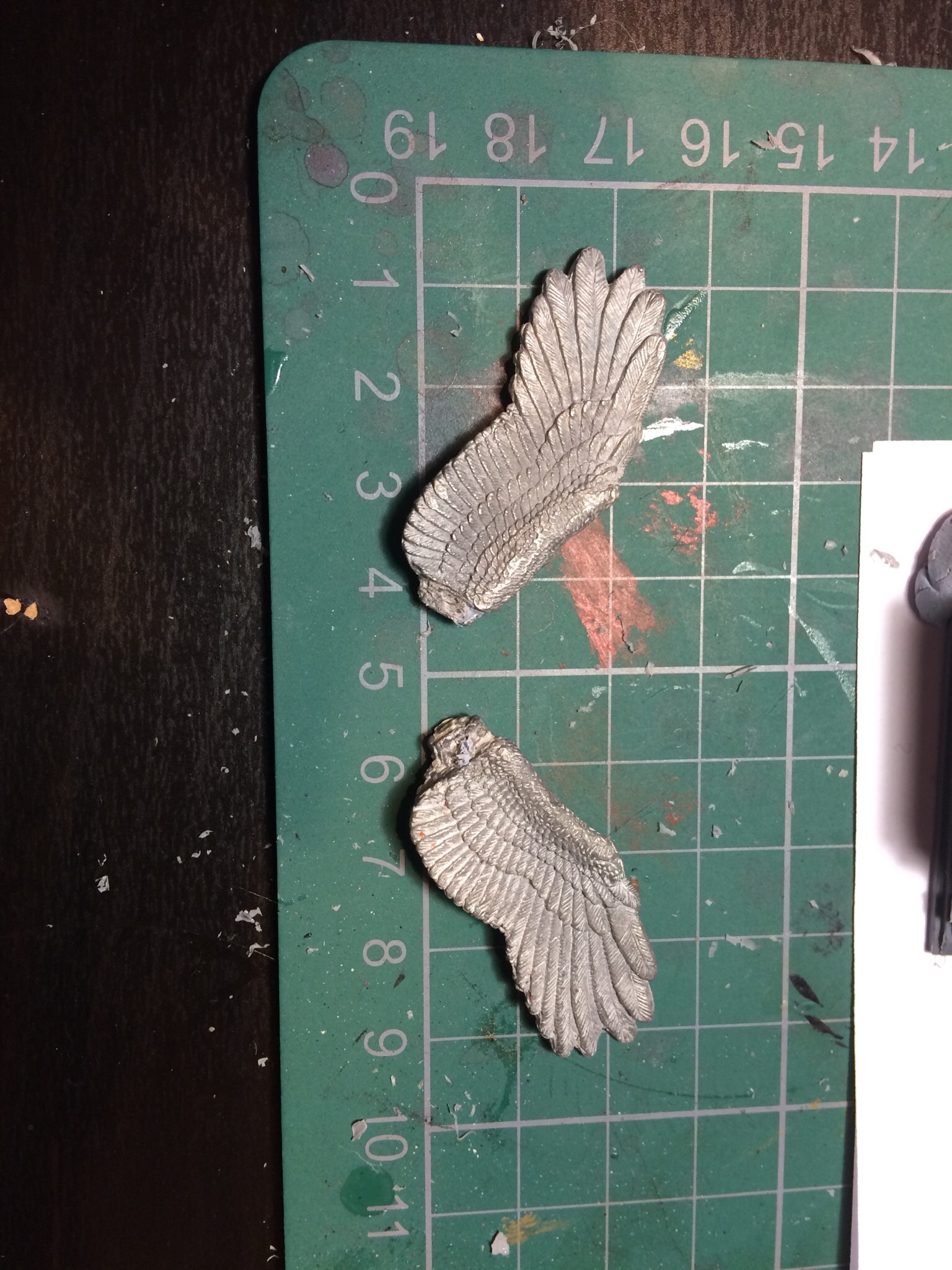 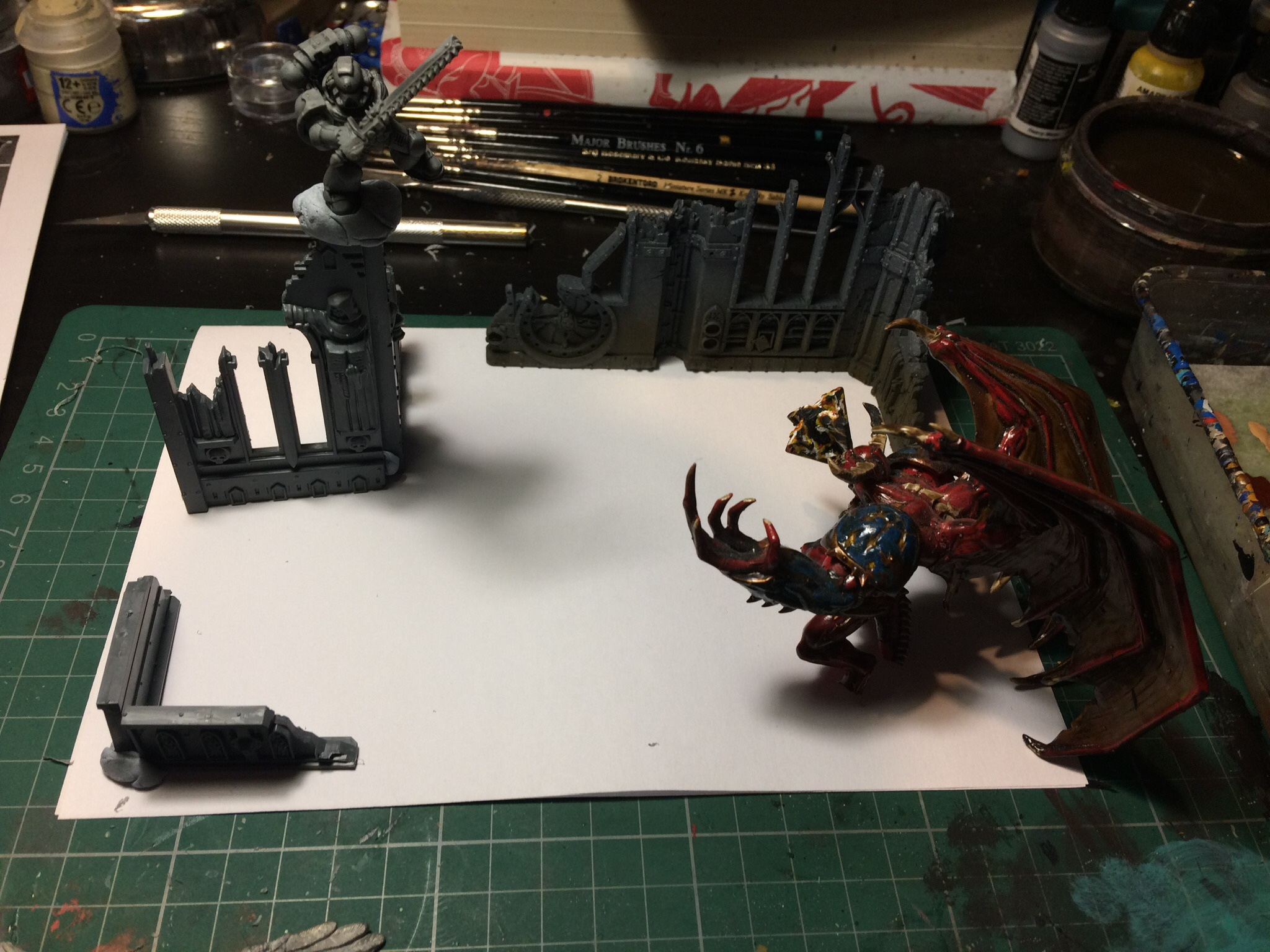 I am going for the last one.

So, I need to get some clear Perspex in order to build the lava on. I think A5 size is perfect for it too.

Next step will be assembling the actual miniatures and going from there.

I finished Dante today, after what seems like forever. When I picked him out of the second hand box he came in, I decided he would be a great opportunity to try a brighter version of Non-Metallic Metals than I have done in the past. Here he is in all his finished glory: 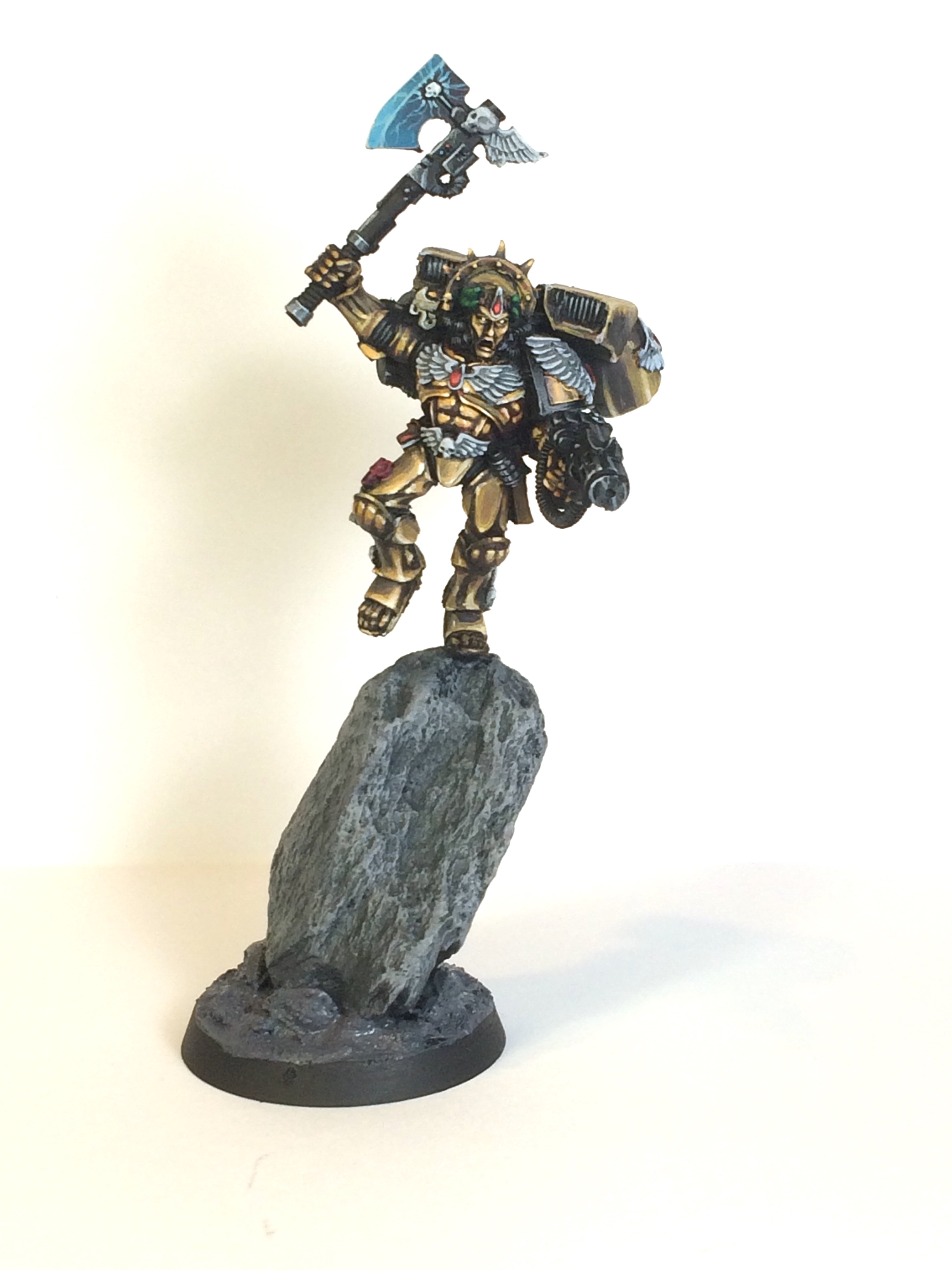 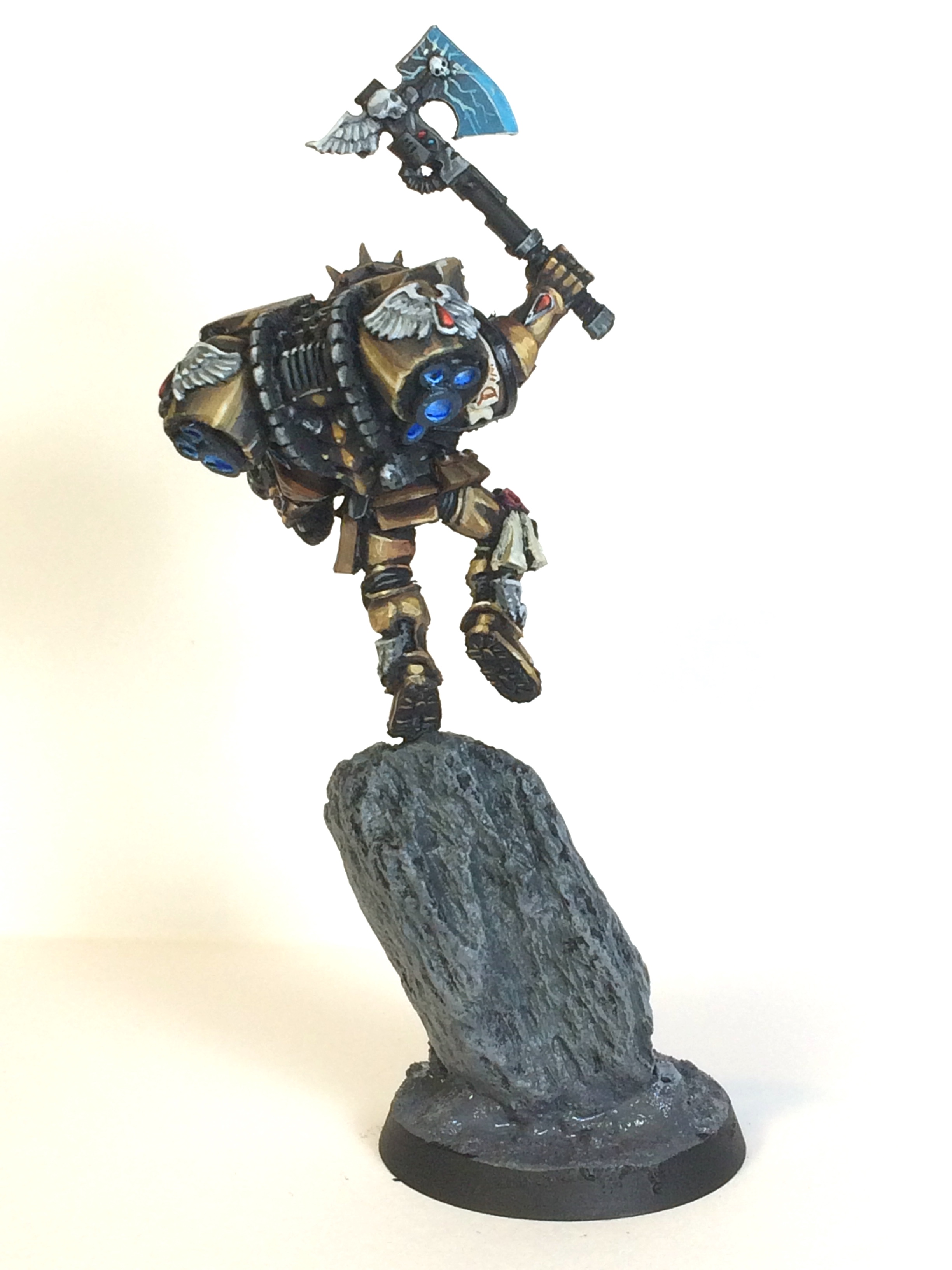 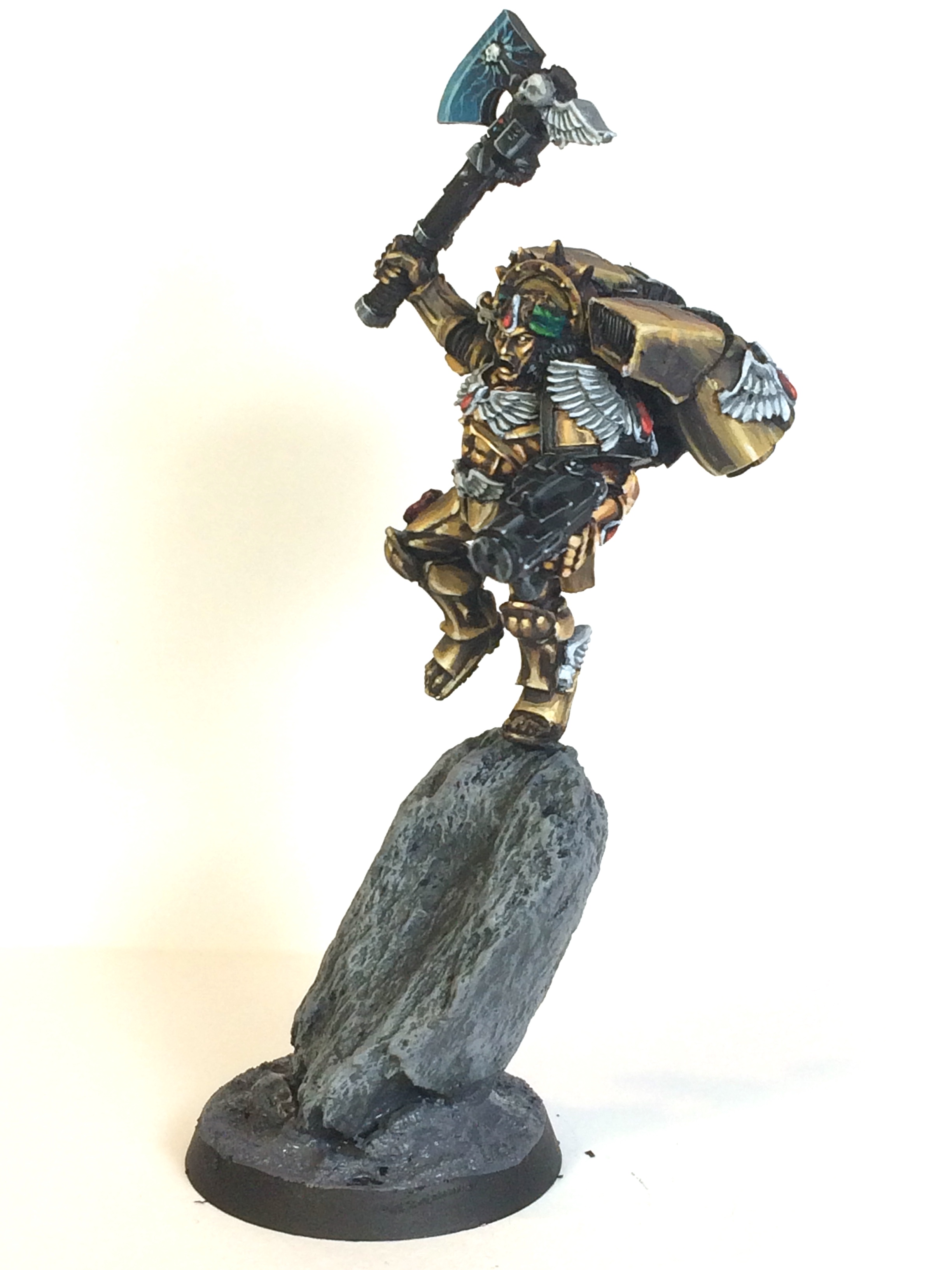 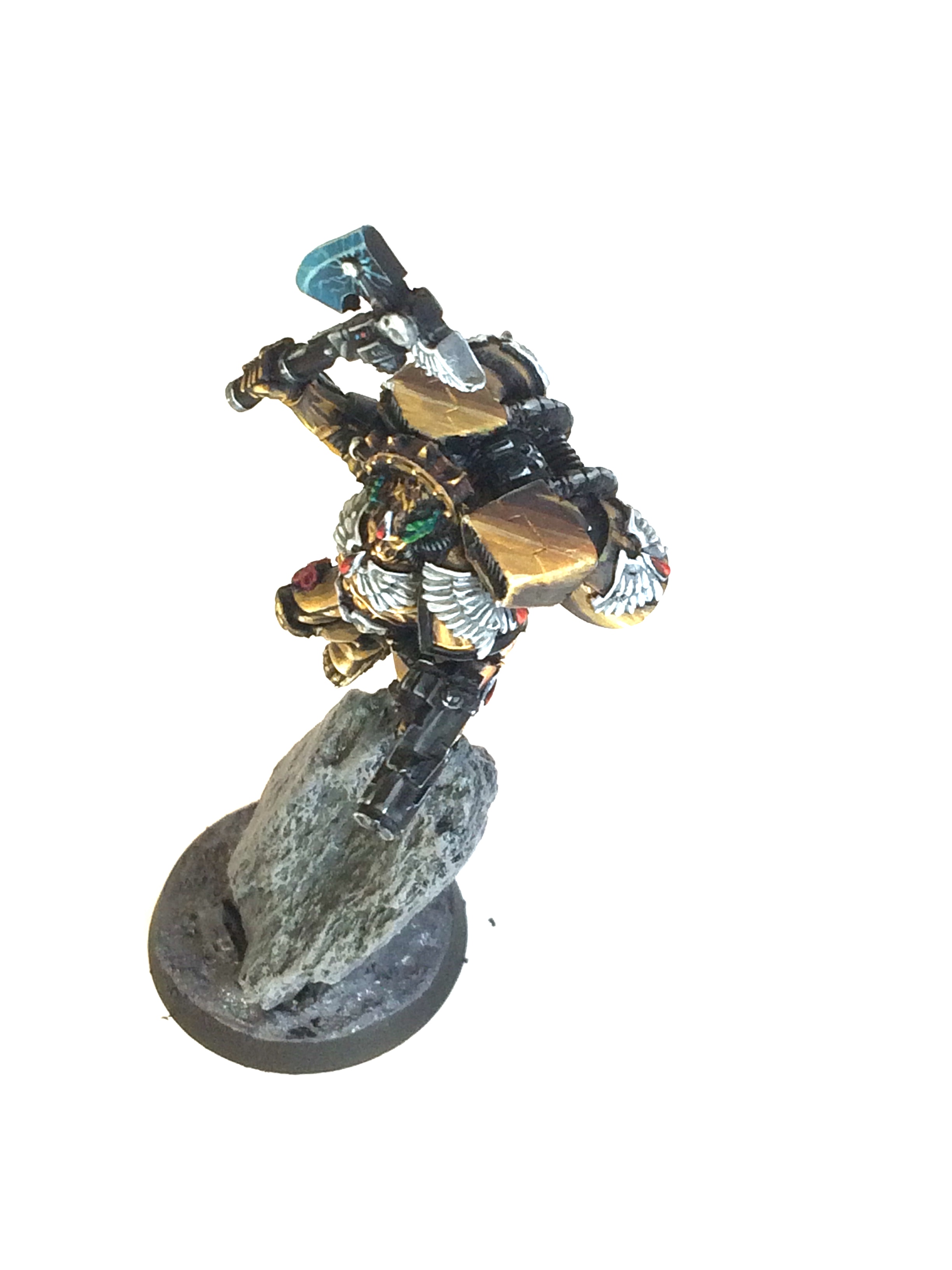 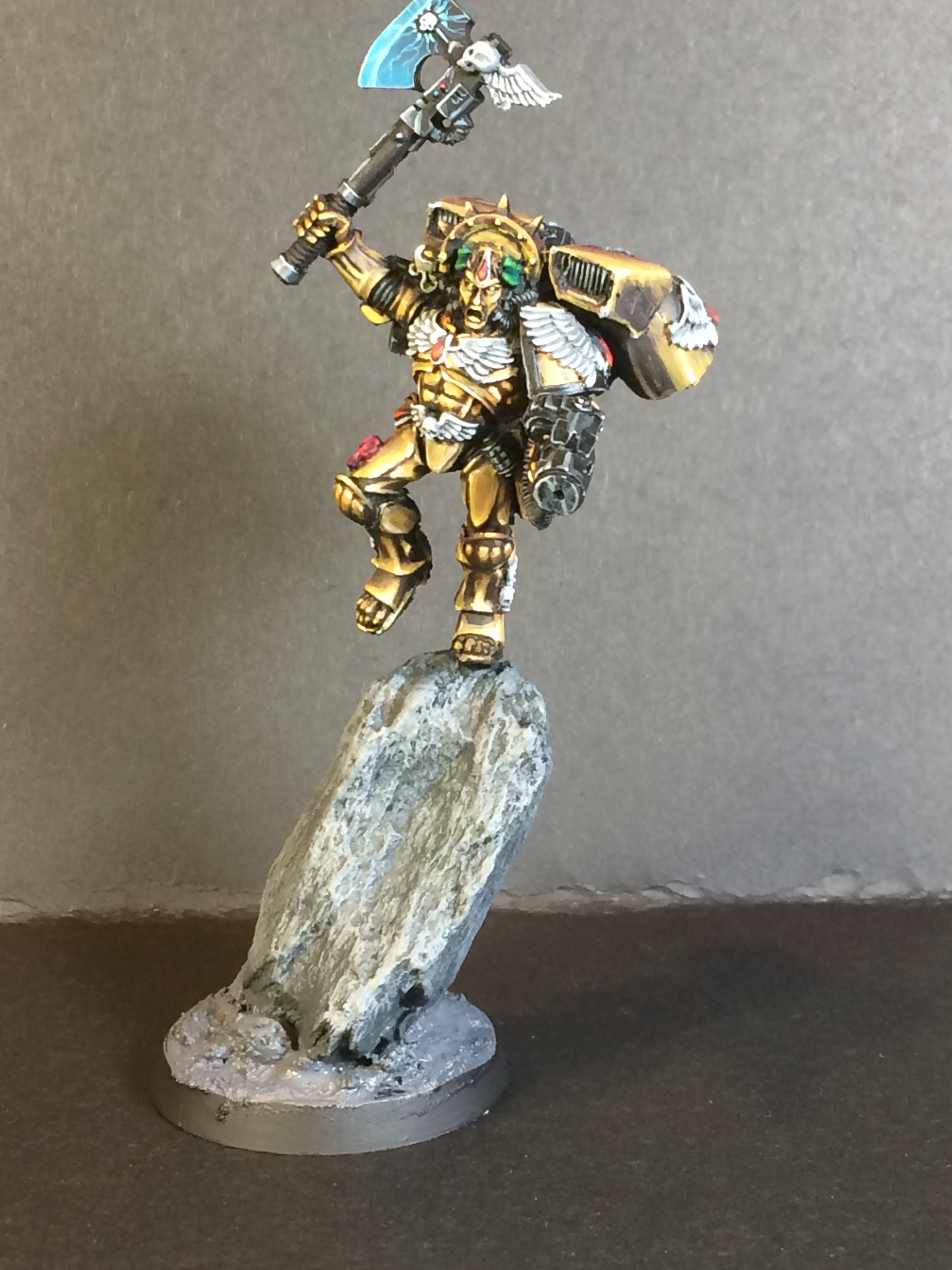 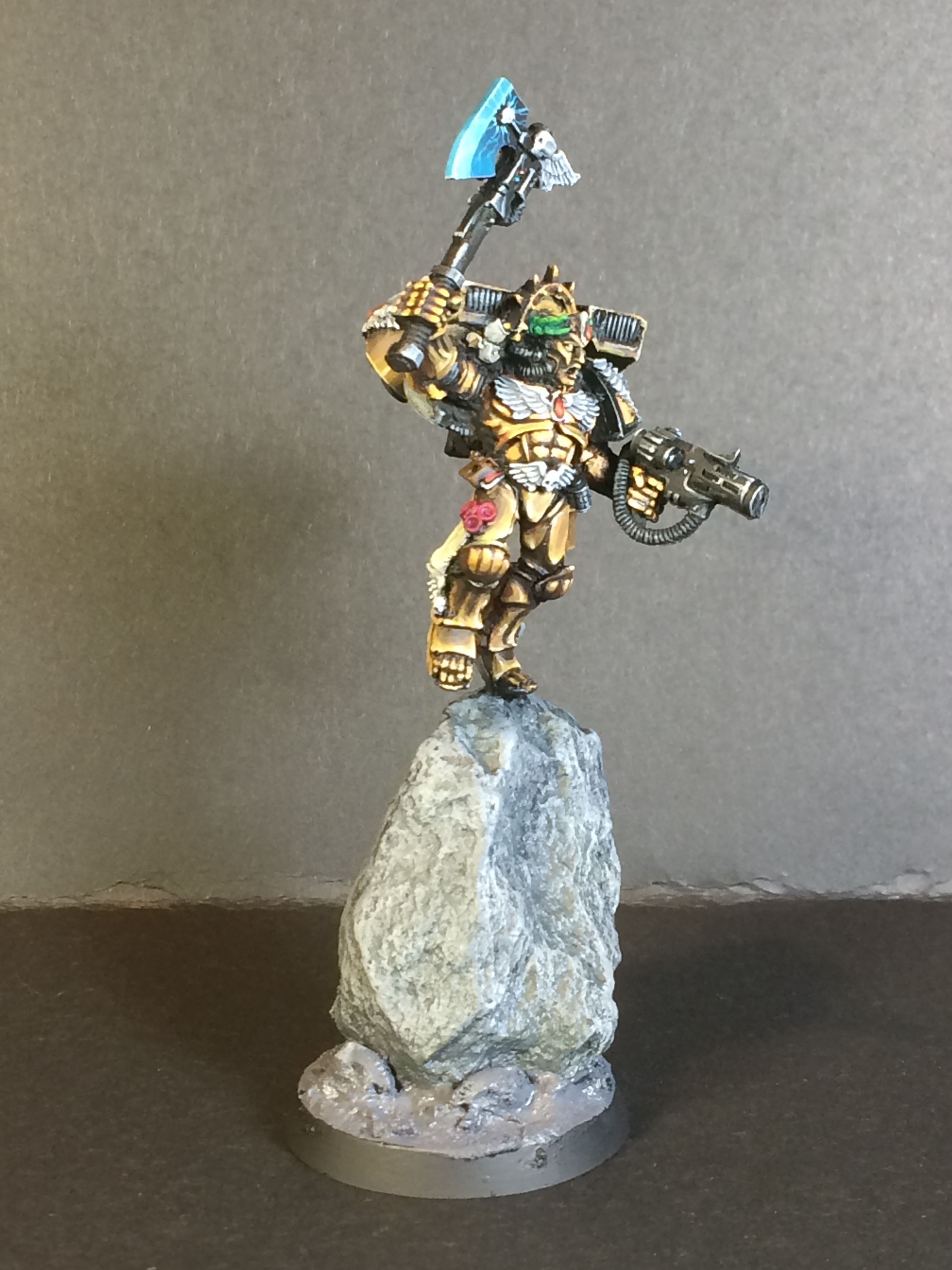 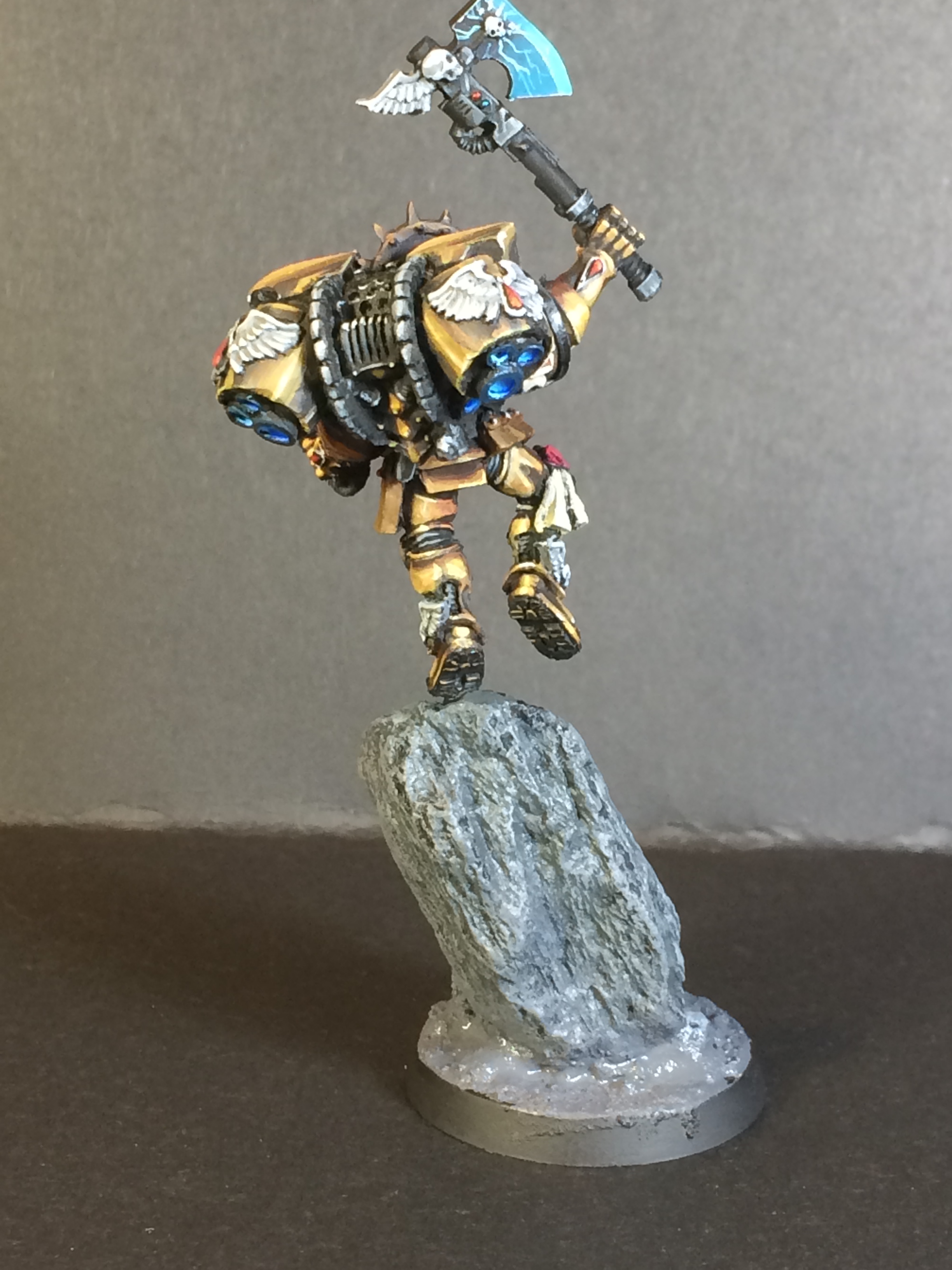 Thoughts on Non-Metallic metals then. I like how much brighter the paints I used turned out. It was difficult half way through because it looked awful but pressing through and using the yellow really brought it out. The blue blends on the axe look super smooth and I really like how the lightning looks as though it is dancing over the blade rather than just stuck on.

Improvement points: I need to make the lighter sections larger, I feel the mini is still rather dark in places. I could use smoothing out the blends as well to make the transitions better. This shows particularly on the larger, flat areas. Silver spots remain a sticking point but this will get better with time.

The base needs a touch up.

All in all though, this has been a great learning process and I have some ways forward for myself. I am pleased with him and he will soon join his brothers in the cabinet! 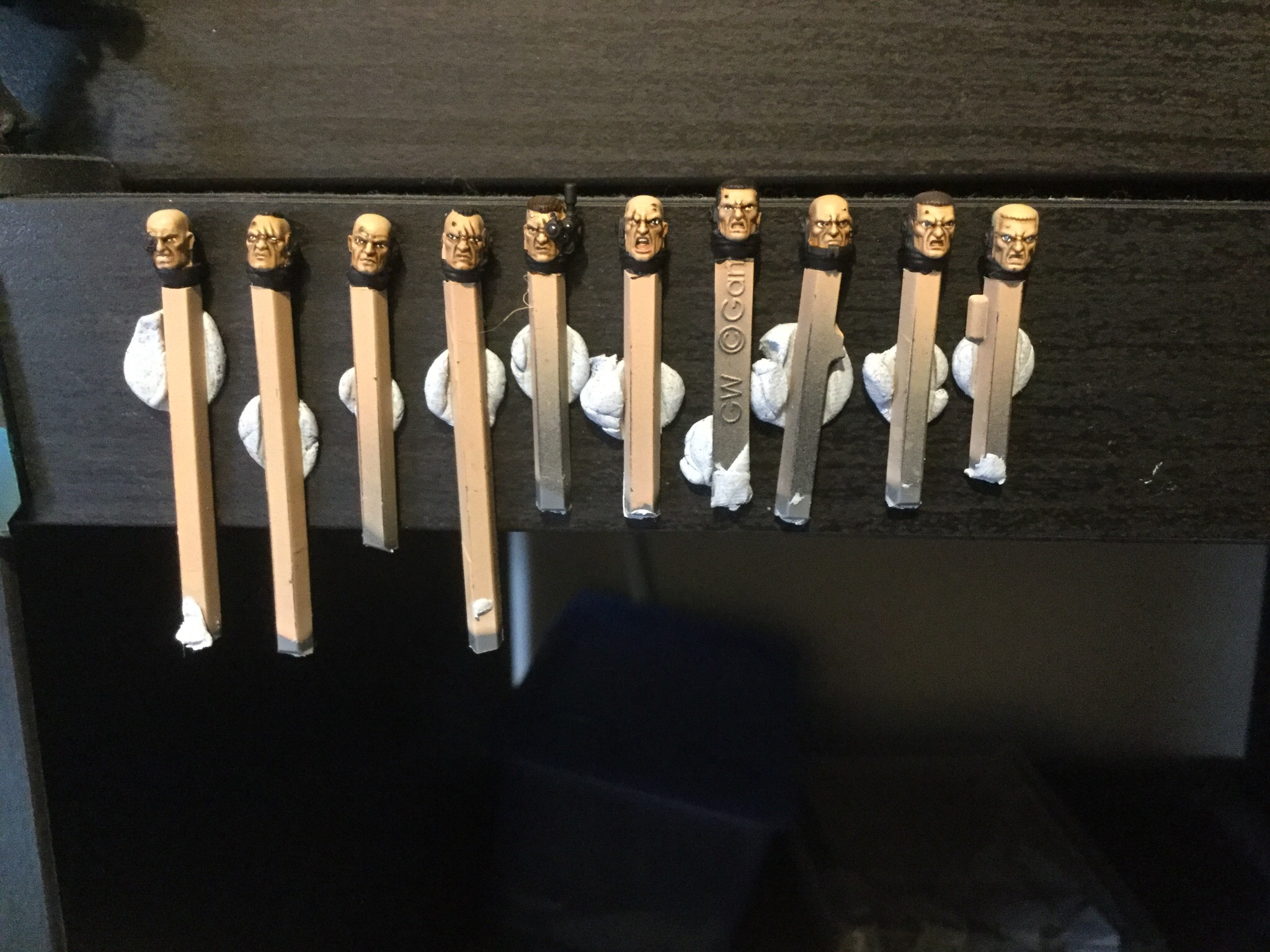 As most of you are aware, I have been practicing painting heads and faces over the past few weeks. I try and do one a day but being on holiday and busy means that sometimes it’s not always practical. Above, you can see all the heads I have done so far. The one on the left was the first.

I rather liked the dot method of painting eyes that I highlighted before, but when I tried to paint iris’ on, it didn’t work too well. A friend over on twitter linked me to a different way and so I gave it a try. This was the result!

His eyes are way too anime to be called good, but for a first attempt at a new method, I was pretty pleased. I look at it now though and think it’s rather funny. Some of the comments were fun, but I had to have another go to make him look less kawaii… 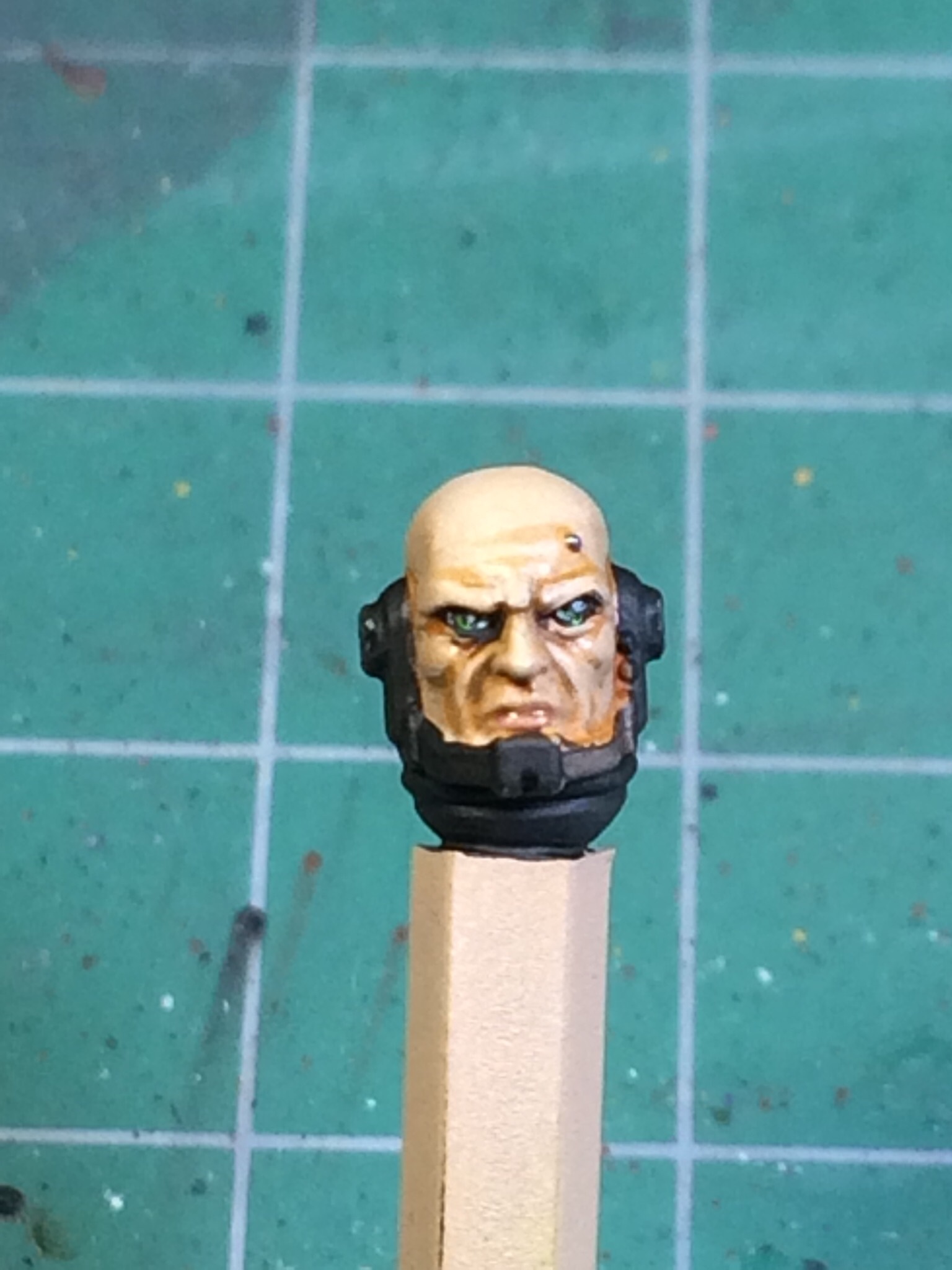 This is a step in the right direction for sure. The black around the edge of the eyes makes it look more realistic and less anime. The left eye is neater than the right and I am wondering if I should try using a magnifying glass as it is hard to see. Maybe I am being too picky with it and practice is going to be the cure in this case. Either way, I look forward to painting those Death Company marines, who will have red eyes and look crazy!