It’s been a while since I have done a book review, though that doesn’t mean I haven’t been reading. I have indulged in a lot of short stories, which would take forever to review them all. It doesn’t mean they are not good, or engaging and they certainly are worth reading however I would be here forever if I posted about them all.

One group of short stories has led me down a rather delightful path, and those feature the oddity that is Mephiston. Recommended by a close friend, I decided that it was time to venture out if the realms of chaos and see what the Imperium had to offer. I must say I was very well surprised with the two short stories: Eclipse of Hope and Lord of Death by David Annandale, however the character really comes into his own when penned by the capable hand of Darius Hinks.

Technically, the language is beautiful. While reading, there were no clumsy sentences, wonderfully crafted metaphors which were wrought in a careful, considerate way. Hinks’ choice of language complimented the carefully crafted world he created for the story and it was neither heavy handed or awkward. The pace of the novel was excellent and it kept me turning the pages until many a small hour – always a successful point. I was gripped.

What truly seized me however were the interactions between the three main protagonists. After reading a lot of novels set in the realm of chaos, it was a true pleasure to read about characters that liked one another. The dynamic between the young Antros, the older, sterner Rhacelus and the enigmatic Mephiston is expertly executed. The three compliment one another, even if they often do not understand each other. I never felt as though there was deceit between them and it was clear that although there was definite fear of death, none of them would die alone.

I don’t post spoilers in my reviews, but I want to discuss one point at the start of the book that was refreshing. Antros seeks the aid of a guardsman in locating a position in a dangerous place. When the inevitable danger occurs, he is desperate to ensure the guardsman survives. The fact that there are Chapters that still regard mortals as valuable and worth saving was brought into this novel clearly, however it never forgot the elements of Grimdark that are associated with Warhammer 40 000 either.

Darius Hinks has done a wonderful job with this novel, and I do look forward to reading the next one, right after Devastation of Baal, which is what I am chewing through rapidly at the moment.

Normally, I wouldn’t blog about Works in Progress (WIPS) as I think it is better to wait until a miniature is done before I talk about it. However I am working on something a bit special I think and it is turning out a lot better than I hoped it would.

Layering was something I have practiced before, both at the Seige Studios painting course and with Gary, but both times have been on swords. I used something similar when I did Abaddon’s non-metallic metals as well, but I wanted to try the technique on something different and see how it worked. I had also seen another WIP of Shalaxi on the internet and so if I got stuck, I would have a frame of reference.

I like the colour blue and have the most experience with it I think, so I picked the four colours and got going. I used Caledor sky for the deep shading, Teclis blue and Temple Guard blue for the mid tones and Baharroth blue for the very light places. Each layer was exceptionally thin and it took a long time to build up the colours so they covered the area and then blend them into place. So far, I have spent 6 hours on the miniature, and I have only done the chest, upper thighs and face.

That said, I think it is already looking pretty special and I really am looking forward to doing the rest of the miniature. It might take a full month at this rate, but it will look good when it’s finished. Perhaps my best miniature yet!

I also want to give the stockings and glove things it appears to be wearing a sheer look, so they are see through. I am not sure how I will do this just yet, but I have plenty of time to work this out.

In my last post, I talked about the amazing new miniature that was Abaddon the Despoiler and the levels of excitement he managed to produce in myself. I felt that I should perhaps talk about his pals in this post.

Let’s start with some quality pictures I have collected of my particular favourites: 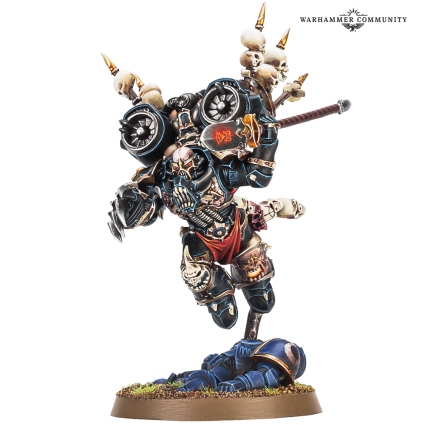 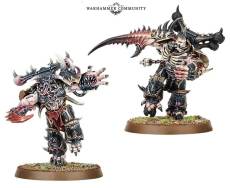 Haarken Worldclaimer was what sparked it all off. He was announced at the Open Day in December while I was at Warhammer World. I remember thinking he was stunning then and that I had to have him. I’ve collected Black Legion for a while and as they were the first Chaos Army I have for 40K, I have a bit of a spot for them. What I love about Haarken is the dynamic pose he is in. I can really imagine him getting all stabby in someone’s face.  I look forward to getting him on the painting table.

The Master of Possession and the Greater Possessed are also lovely miniatures. Again, the posing on them is sinister, interesting and look like a lot of fun to work with.

Now let’s have a look at some new troops:

The new Chaos marines look way, way more interesting than the old ones. I have had some of the old ones on my painting table for ages now but don’t really do anything with them other than use them for testing paint and different schemes here and there.

These new ones will not be getting that treatment. They looks as bulky as you would expect but interesting as well. Ther also seems to be some scope for individualising them as well, but I will see when I get a chance to look at the sprues when the multi-part kit comes out. The terminators as well, though I am not sure how different they are from the old ones.

Then the man with the bog chopper was announced today. The Master of Executions looks like he will be a barrel of laughs to face on the battle field… Or not.

What I am trying to say here is that I want them all and I need to paint them up. I then want to go and smash people with them. That would be a great deal of fun!

This week, in Warhammer Club, we moved on from fixing up the miniatures and ensuring they were base coated to actually painting them. The members of the club were suitably enthusiastic about the prospect and without much hesitation, they got stuck in. It was a pleasure to watch them look at the miniatures and see the details before liberally applying lashings of paint. Of course, some were neater than others but all of the members were happy to get involved. I have taken some carefully shot pictures of the miniatures for you to enjoy here: 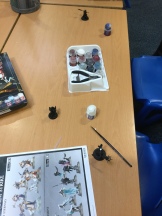 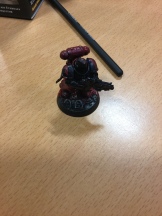 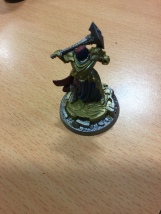 By far, the best part of running this club is when the kids come up to me with the miniatures they have gone out to buy themselves and enthuse about them. I love hearing that they have been in to Games Workshop and played there, or found the assassin and got their free figure. It really lights up the day!

I am also looking forward to playing some of our own games in a few weeks time – learning that with them is going to be a lot of fun, though probably frustrating as well. They are very young after all.

It truly is the highlight of the week!

Speed painting was a skill I thought I would never obtain. I have spent many long hours, like many other hobbyists, studying and painstakingly picking out details of a miniature and finding it takes ages to actually finish anything.

Then I decided I want to do some commission painting and knew that had to change. I have started to focus on how long an individial miniature takes and have been working on making it smaller. Today, I managed to paint the Primaris Apothecary to a high standard in four hours. I have never painted the mini before and so I was pleased with the outcome. Here is the finished model: 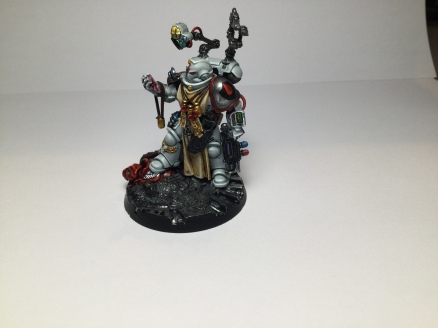 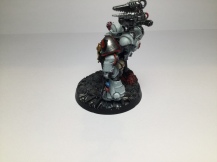 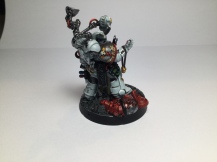 In order to speed up the painting process, I focused on areas rather than the whole miniature at a time. I would do one part, wash it if needed and then work on another area while it dried rather than put the mini down and let it dry before starting again. It meant I neglected the rubric marines a bit but it did mean I got him painted today rather than over a couple of days. I will certainly be trying this technique again when I paint my next character model.

This Apothecary was painted for my sister as a part of a miniature ‘trade’, she is painting me a Thousand Son Sorcerer in return. We named the apothecary Xerxes, or Jerkxes, as he is a bit of a jackass. He kept trying to poke holes in the Rubric Marines to let the dust out when I wasn’t looking…

Another mini I have painted quickly that I wanted to mention was ‘Larry.’ I painted him in thirty minutes at the Warhammer World Open Day in January. I am so pleased with him too. For thirty minutes, he looks rather fine! 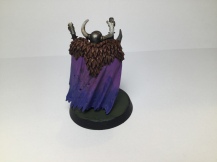