I’ve been a bit busy getting married these past few weeks and as such have not had a great deal of hobby time to get either writing or painting. The wedding was wonderful and the honeymoon a big pile of fun too. However, after recovering for a day, we did manage to get some hobby in to make up for it. While away, I was browsing Pinterest and saw an awesome effect on a cloak of a miniature and decided that I wanted to try and recreate it myself. Here are the results: 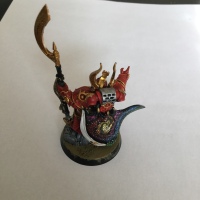 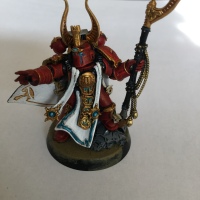 The effect of painting a galaxy on a cloak was a tricky one that involved creating a base of the swirling colours and then painting an awful lot of little dots over the top finishing off with some white ones. The colour of dots depended on which part of the cloak I was painting but I think it worked out well over all. I think I will be trying this technique again on psyker/librarian characters too. It’s just a shame that this heretic – Ahriman – will likely never see much play time.

The other model I have been painting was found at the Warboot at Element Games a few weeks ago (with a huge hangover no less) and was picked up with a friend who is some sort of demented chaos apothecary with Fabius Bile’s pack back. The Thousand Son miniature was already undercoated and having just finished the novel, I decided to paint him up all nice. He is a fine-cast miniature but let’s not hold that against him, he looks alright and I am sure he and Ahriman will be running off with all the cookies in the cabinet in some sort of heretic shenanigans.

Another I wanted to mention was sorting out the marines I had into squads. It was a job I have put off for a while but I finally got the time to sit down and get it done. I knew I had a lot of models and that they needed to be sorted – more so I know who belongs where and who gets what markings. Turns out I have enough for seven squads of a battle company and some Terminators, Dreadnoughts and Bikes (not assembled yet) for support. I also have other models that are not yet put together which will form the majority of the command unit too. Here they are, the Black Hands Second Company in all their ‘organised’ glory.

And finally,  I have to mention one of the awesome gifts my husband and I received as a wedding present. We were given a lot of gifts and are exceptionally grateful for all of them. I feel this one needs a special blog mention though:

As some of you will know, I am getting married tomorrow. The past few days have been a bit of a whirlwind, trying to organise various things; decorations, relatives, cakes and other assorted bits and bobs. I’ve had a lot less time for painting and playing and even less for writing. Fear not, the story is still growing just at a much slower rate than before.

We are not having a huge formal wedding, we’re not those kind of people. We wanted to do something that reflected our quirks and would be enjoyable for everyone, not one of those huge formal affairs were everyone appears tense. I always knew I wanted something in my bouquet; I just wasn’t sure what… 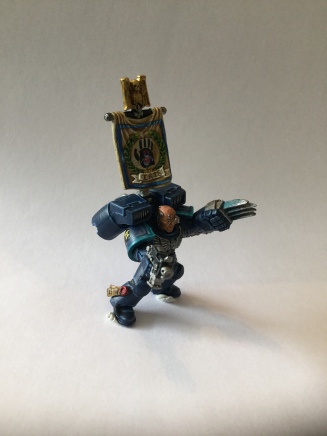 That’s where this guy comes in.

This is Sergeant Flowers. The history I with painting miniatures began when I was around 14 years old and is a story too long for the telling on this post. My recent ‘obsession’ is with 40K and Space Marines so it seemed like a fitting idea to have a guy with a jump pack hidden in the flowers.

A little bit about Flowers then – his first name is Iris (which is painted on the banner in the centre of the black hand). He is the sergeant of the fourth squad in second company and is known for being mean. With a name like Iris Flowers, one worthy of The Emperor’s Children, he has to be. He has served for over 200 years so far and is a dab hand with the lightning claw.

After the day,  intend to take him out of the bouquet, fix him to a base and field him alongside the rest of his assault squad. I will leave you with the shot of him all ready for the big day tomorrow.